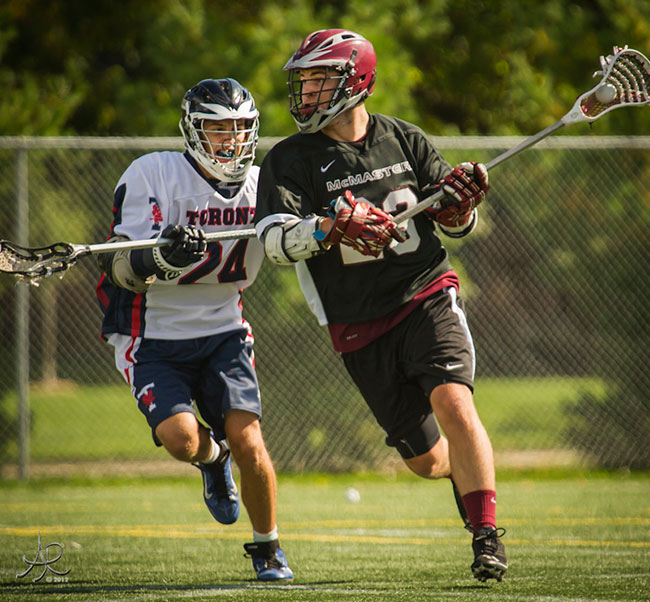 Williams scored the game’s first goal in the opening minutes, but Toronto responded with three, two within two minutes of each other from Jeremey Hayton (Stratford, Ont.) and Michael Buwalda (Toronto). Ryan Paris added the third with five minutes left.

Mac’s seven-goal second period was highlighted by a burst of six unanswered goals. Schram and Mark Phillips (Alma, Ont.) would get two each in the opening 10 minutes. Williams had his scored and Dredge scored his first. Toronto’s Jordan Robertson (Toronto) sandwiched one for the Blues before Williams would connect for his third to give McMaster an 8-4 lead.

Toronto’s Corey Wright (Newmarket) and Justin Crofts (Toronto) got the Blues within two but before the third quarter was up, Schram would score his third before suffering an injury to give McMaster a three goal cushion heading into the last quarter.

In the last 20 minutes of the game, McMaster produced five more unanswered goals. Dredge would score two within four minutes, Jamie Batten (Bolton, Ont.) would get one with four minutes to go, and Ryan Adams (Oakville.) and Alex Goacher (Oshawa) would get one each to finish off the scoring.

Wright would get one more for Toronto before the end of the game.

Mac’s next affair will be against the visiting Guelph Gryphons at home on Wednesday. Guelph was a 23-5 victor in their last meeting.

On a personal note, it was nice to step on the lacrosse field after all these years. I even saw a familiar warm face from the past. Bill Fox is a referee from my box/field lacrosse days who was regulating the game. We caught up and had a few laughs. The last time we met was at the 1998 World Cup Lacrosse Championships in Baltimore, MD. I was shooting for Dinawo of Six Nations and he was one of the international lacrosse referees. After watching the Mac boys play. I wanted to pick up a stick and play around like the old days LOL!!!!