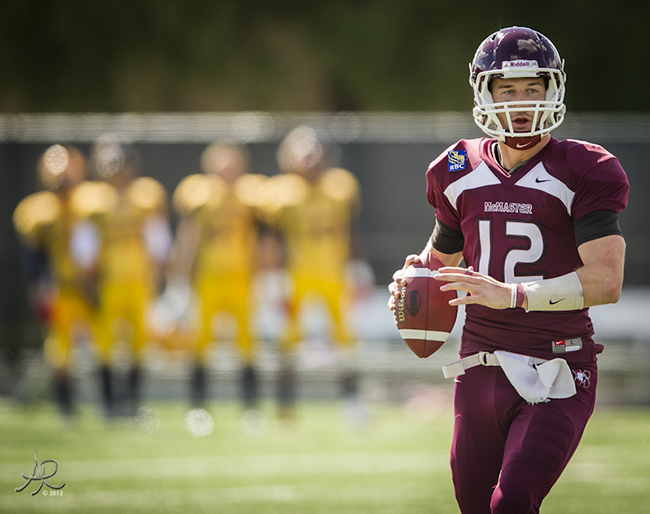 Source: Ontario University Athletics– October 1, 2012 [More Sports: Hamilton Scores] Not that McMaster quarterback Kyle Quinlan has been away. He’s back for the second straight week as Ontario University Athletics offensive football player of the week for the period ending Sept. 30. Quinlan led the Marauders to a 33-27 victory over the No. 6 Western Mustangs. The fifth-year pivot did damage with both his throwing arm and his legs as the game’s leading rusher with 145 yards on 10 carries with one touchdown. In the air, he completed 18 of 32 passes (56 percent completion rate) for 247 yards and two touchdowns. The South Woodslee, Ont. native remains interception free five games into the season and the win keeps McMaster in possession of first-place in OUA. And a good offence appreciates a good defence. Which is why Quinlan’s teammate, Nick Shorthill, is this week’s defensive stalwart. The Marauders linebacker was a defensive force for McMaster as the Marauders spoiled Western’s Homecoming with the win. The second-year player was all over the field making plays. The Nobleton, Ont. native registered 11 tackles, 10 of which were solo efforts. He also had three quarterback sacks as the McMaster defence applied constant pressure on Western’s quarterbacks. With Mac offence and defence taking individual weekly honours, it seems only appropriate that the entire Marauders were named the Pizza Pizza OUA Men’s Team of the Month for September. The Marauders have held the No. 1 spot in Canada since the start of the 2012 Canadian Interuniversity Sport football season. With a 5-0 record, the defending Vanier Cup champions have defeated two top ten opponents. The Marauders sit in the top ten in the nation in nearly every statistical category and Quinlan has thrown for over 1,000 yards and nine touchdowns in just five games. OUA special teams players is Chris Patrician of Queen’s Gaels. The third-year receiver broke Saturday’s game against the Ottawa Gee-Gees wide open with a 91-yard punt return at 9:57 in the second quarter. The Toronto native’s runback put the No. 5 Gaels up 11-0 in a game that they would eventually take, 32-25. The OUA female team of the month award went to the University of Ottawa women’s soccer team opened the 2012 season ranked third in CIS. An early season definitive 3-0 win over the defending national champions from Queen’s vaulted them on a course to the top of the national rankings. The team’s 10-0-1 record has been bolstered by an OUA-best 35 goals, while giving up only a single marker against. The Gee-Gees have won six straight games and have an eight point lead over the second place team in the OUA east division. Copy Credit: Hamilton Scores, Ontario University Athletics– October 1, 2012 Photo Credit: Robin Leworthy Wilson, Aerial Promotions