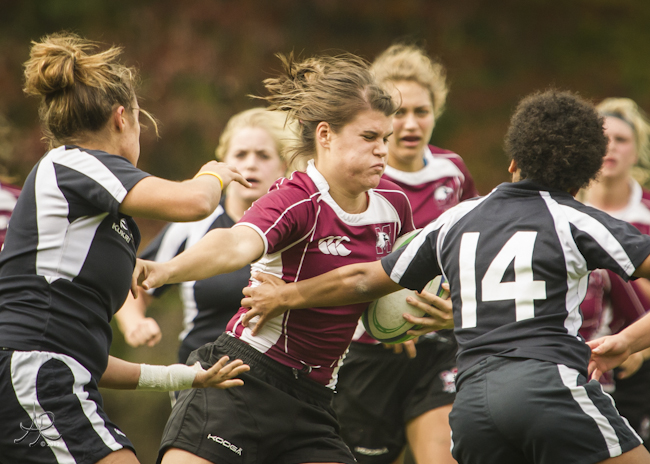 The McMaster women’s rugby team ended regular season play with a bang – 60-7 – over Toronto Varsity Blues and finished in second place in the Russell Division of Ontario University Athletics.

The win on Friday (Oct.5) gave the Marauders a record of 4-2 for 19 points. Including the Shields Division, McMaster finished third overall.

Queen’s Gaels topped the Russell group with a perfect 6-0 mark and 30 points. The powerful Guelph Gryphons led the Shields group, also with a clean 6-0 slate. During regular season play, the Gryphons outscored their opponents 388-8 compared to Queen’s results of 294-54.

McMaster got off to a great start just six minutes into the match. From deep in Toronto’s end, Sarah Farquharson (Niagara Falls) found a hole through the defence to score the first try. Stephanie Black (Ottawa) connected for the convert for the 7-0 lead.

The Blues would follow up with a try 20 minutes later. Monique Petricone (King City) took a long run up the middle beating a few McMaster defenders for the try. Nicole Baker (Toronto) would score the convert to tie it up at seven.

Just five minutes later, McMaster would retake the lead. Veteran Maggie Cogger-Orr (Thornhill) would do most of the work, weaving her way up the middle of the field to the goal line where Rebecca Thompson (Guelph) finished it off with a try. Black would add the two points.

Shortly after that, Cogger-Orr scored the next two tries for McMaster for a comfortable 24-7 lead going into the second half.

McMaster wouldn’t stop there. They would shut out of the Blues for the entire second half and go on a scoring rampage. First up was a try from Sarah Berry (East York) with a big run up the sideline and through the Toronto defence. Eight minutes later, Black had two tries just two minutes apart and connect on both converts to go up 43-7.

To finish off the game, Cogger-Orr would score her third try of the game and Kailyn Jones (Port Colbourne) would get one of her own. Both converts would be made by Black for a final score of 60-7. One more try would come from Claire Lockhart (Waterloo) before the end of the game.