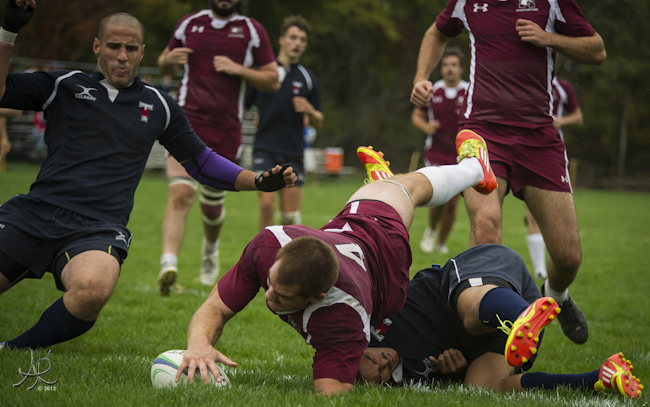 Marauders run over Blues in rugby

Toronto Varsity Blues were even more so after their men’s rugby encounter with the McMaster Marauders.

McMaster man-handled the visiting Blues, 85-0, for their fourth straight win Ontario University Athletics play on Friday (Oct. 5). James Leveridge (Oakville) scored 11 converts, a try and a penalty goal in the win which improved the Marauders to 4-2. The Blues are winless in five outings.

From the get-go the Marauders dominated the entire match. Within the first 10 minutes, McMaster was ahead 17-0 with a penalty goal from Leveridge, a try from Trevor Anderson and another from Chris Gordon (Pickering). Leveridge’s two converts completed the 17.

And it didn’t stop there. Taylor Wilenski (Pickering) found his way through the Blues’ defence for his first try of the game. Before the half was up, Davor Stojanov and Alexander Kuntz added to the growing list of tries. Leveridge remained perfect for converts, giving McMaster a 38-0 lead going into the second 40 minutes.

In the second half, Gordon started the scoring for the Marauders. Within the next 10 minutes, Wilenski had his second and third tries of the game and once again, Leveridge connected for the converts.

Connor Patterson (Barrie) contributed his first try of the game with Leveridge adding the convert, a try and another convert. Tries from Justin Ramirez and David Van Buren concluded the scoring for the Marauders. Leveridge missed his convert on the last try of the game.

McMaster travels to Waterloo to take on the Warriors on Saturday (Oct. 13).