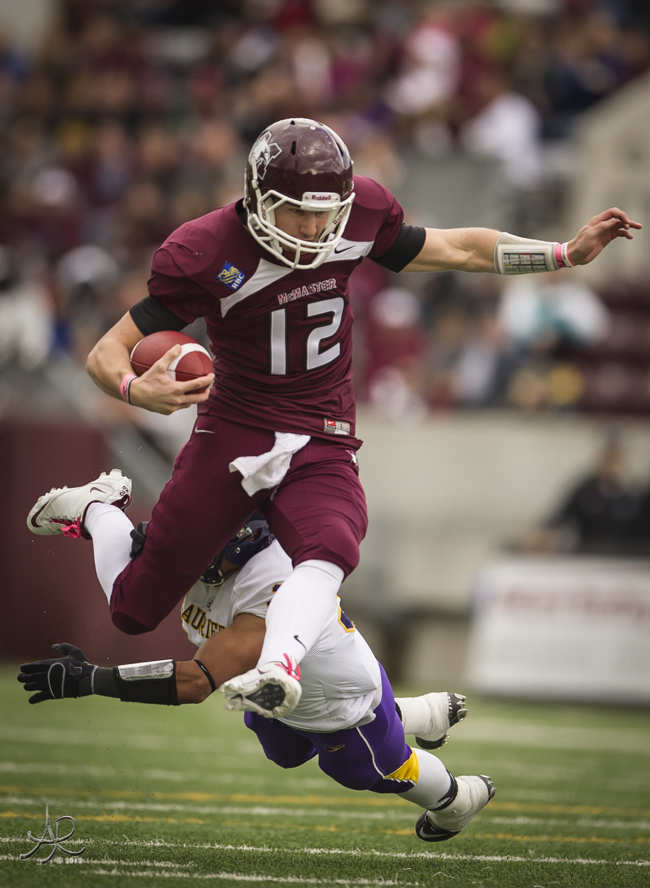 The win marks McMaster’s first undefeated regular season since 2003 when the Marauders rolled to an unblemished regular season record and a Yates Cup victory. With Calgary’s loss to Regina on Saturday, McMaster finishes the regular season as the only undefeated team in Canadian Interuniversity Sport. The win was the Marauders 18th in a row going back to Week 3 of the 2011 season and is one shy of the CIS record set by Laval from 2004 to 2005 .

Quinlan capped the 2012 season by breaking McMaster’s all-time passing touchdown mark. The South Woodslee native connected for his 60th TD toss to surpass Ben Chapdelain who played for the Marauders from 1997-2001.

The Marauders’ passer, who finished the game going 16-for-19 with 217 yards, the one throwing touchdown, and two rushing majors, was pleased with the perfect season, but was already focused on the 2012 playoff run.

“It’s something we can celebrate for a little bit, but this is a veteran group and we know better than to be too happy with that,” said Quinlan. “We are looking forward to the playoffs – being 8-0 and lose out in the first round doesn’t mean anything. We have to go out and win them all now.”

The Marauders’ defence shut down the Golden Hawk offensive attack allowing just 121 yards. The shutout was Mac’s first since Sept. 26, 2008 against York.

McMaster’s Joey Cupido of Hamilton was the top defensive player posting seven tackles and collecting the lone interception of the game for a 29 yard return.

“[The defence] worked their butts off putting a zero on the board and that means something,” said Marauders’ head coach Stefan Ptaszek. “They’ve given up the fewest points in the OUA and I think that means something to them as well; they deserve to be recognized as, if not the best group in Ontario, then one of the best.”

Quinlan’s record breaking toss came with 5:10 remaining in the second quarter when he found Josh Vandeweerd (Burlington) on a one-yard pass to make the score 24-0 at the time.

Tyler Crapigna of Nepean, Ont. opened the scoring with a 43-yard field goal at 8:41 of the first quarter.

Backup quarterback Marshall Ferguson (Kingston) converted a five-yard pass to Dahlin Brooks (Kitchener) to make the score 33-0 with five seconds remaining in the second quarter. He also added a rushing touchdown midway through the fourth quarter to close the scoring. He finished 13-for-17 with 153-yards passing and one touchdown in relief of Quinlan.

McMaster earns a bye during next week’s OUA quarter final games and will return to action on Nov. 3 at 4:30 p.m. Next week Windsor will battle Western in London while Laurier will take on Queen’s in Kingston.

NOTES: This is the fourth time in McMaster history that the Marauders have finished with a perfect season; the others were 1984, 2002, and 2003… Announced attendance at Les Prince Field at Ron Joyce Stadium was 2,213.

Quinlan scored his 60th career passing touchdown that broke an all-time McMaster Record held by Ben Chapdelaine. Quinlan passes to Josh Vandeweerd in the last 5 minutes of the second quarter.

Kyle Quinlan led the McMaster Marauders to a perfect 8-0 season rushing for two touchdowns and throwing for another in a 43-0 Ontario University Athletics win over Wilfrid Laurier Golden Hawks on Saturday (Oct. 20).