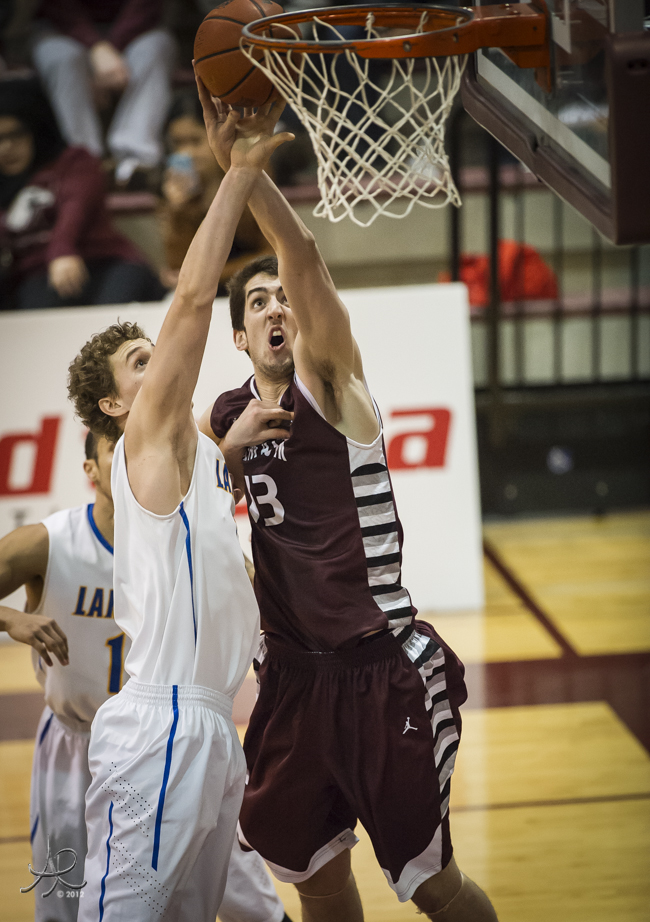 It didn’t hold the same stakes as the previous night, but the McMaster men’s basketball team showed some pride with a 92-82 victory over visiting Lakehead Saturday night (Feb. 15) in Hamilton.

Prior to the game, the McMaster staff honoured the graduating seniors from this year’s team: Kyle Chevalier, Nathan Pelech and Scott Laws.

With both teams locked into their respective spots in the Ontario University Athletics West standings, McMaster could only try to end its seven-game losing streak against Lakehead in conference play going back to 2010.

On this night, it was Lakehead which scored two quick hoops to get an early lead, but Mac evened things up and the teams played even, until a late surge by the Marauders saw the quarter end with Mac on top 28-18.

Both coaches went deeper into their bench players than they might normally, preferring to save wear and tear on the starters with the post-season looming. McMaster carried the momentum to start the second quarter and built the lead up to 16 (41-25) on a trey from Adam Presutti. Following a timeout by Lakehead, the Wolves began to claw back, and at the half they had shaved the Maroon advantage down to 45-38.

Like the previous night, Lakehead looked to assume control to start the second half and went on a 10-2 run to grab the lead at 48-47. McMaster responded though and came up with a run of its own so that by the end of the third quarter, the lead was 62-53 with 10 minutes left in the game.

The fourth quarter became a battle of attrition as both teams were whistled for numerous fouls. The Wolves closed to within six, but Presutti hit a timely three-pointer to bump the margin back to nine. With time running out, Lakehead looked to its defense to force some turnovers but some over-aggressive play put McMaster at the charity stripe and the Marauders made their free throws to close out the win.

Top Lakehead shooter was Joey Nitychoruk, who finished with 18.

McMaster finishes OUA play with a 13-8 record and enters the playoffs as the third-seed in the West division. The Marauders will host the Waterloo Warriors on Wednesday (Feb. 20) in a division quarter-final. Tip-off will be at 8 p.m.