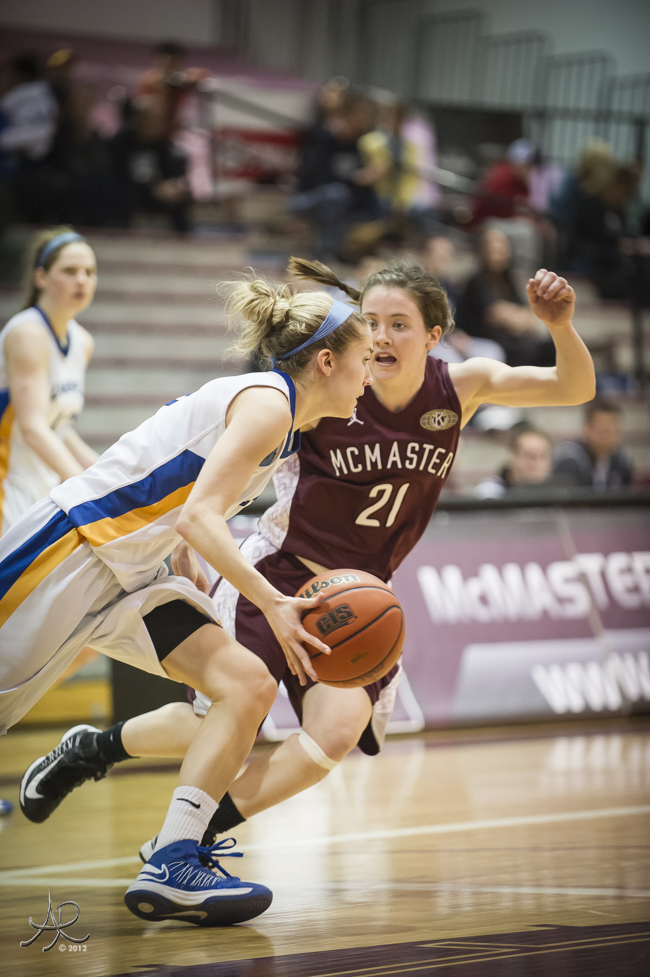 The McMaster women’s basketball team rode some tenacious second-half defense to an 87-71 victory over visiting Lakehead on Saturday night (Feb. 16) and as a result moved up to third-place in Ontario University Athletics West division.

Both teams had something at stake as McMaster was looking to improve in the standings, while Lakehead had to win to make the post-season after Guelph beat Waterloo earlier in the day.

The Thunderwolves wanted to shut down Marauder post Hailey Milligan, who has been a point and rebound machine for the past two months. The first quarter was see-saw as Lakehead collapsed on Milligan, forcing Mac to get scoring elsewhere. After one quarter the Marauders held a 22-21 lead.

The second quarter saw Lakehead heat up from the perimeter, and with the Marauders having a hard time finding their top scoring option, the ’Wolves went up 50-39 late in the half. But Mac guard Vanessa Bonomo drained two three-point shots in the last 20 seconds to reduce the deficit to only five at intermission and re-take the momentum.

Lakehead had made 8 of 15 from beyond the arc in the first half to grab the advantage.

Giving up 50 points in a half put the Marauders in a bad mood entering the third quarter, and the team responded by going on a 14-0 run to grab a nine point lead. With its season the line, Lakehead refused to quit and cut the deficit to 68-64 at the end of the third.

The fourth quarter saw the Marauder defense take control. Outscoring Lakehead 16-0 over the first four minutes of the period built the lead up to 20, and the Thunderwolves had no answer. McMaster allowed just seven points and only one field goal in the final quarter to bring home the win and knock Lakehead out of the playoffs.

Top shooter and BIG MAC player of the game for McMaster was Milligan, who got on track in the second half and finished with 24 points and 11 rebounds for her 11th consecutive double-double game. Bonomo also registered a double-double with 20 points and 12 assists, while Danielle Boiago with 19 and Liz Burns with 11 scored in double digits. Lakehead’s top scorer was Carolyn Fragale with 18 in her final CIS game.

The win improves the McMaster record to 12-9 and advances them to third in the standings. The Marauders will now host the No. 6 seed, Guelph Gryphons, on Wednesday, Feb. (20) in a division quarter-final, slated to tip off at 6 p.m.