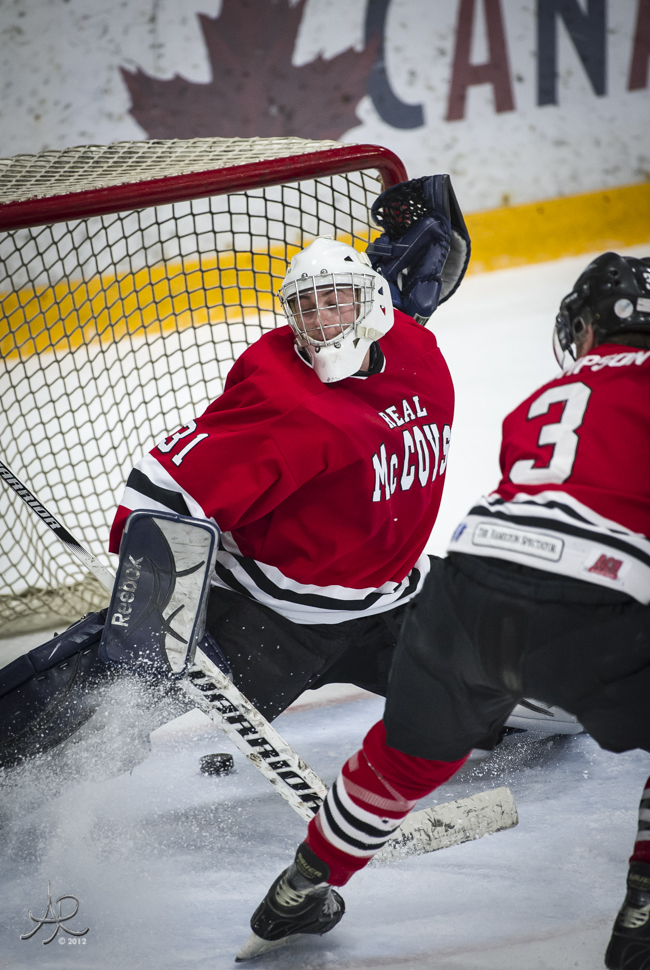 Fans of the Dundas Real McCoys were left scratching their heads and wondering ‘where are the REAL McCoys?’ after the club, which had shown such promise finished the week with consecutive losses to the league leading Brantford Blast and the second place Whitby Dunlops.

“Last week’s games didn’t mean much, and boy did it show. I’m sure that will not carry over into the playoffs with Whitby,” said general manager Don Robertson.

TJ Sakaluk, the lone scorer for Dundas last Wednesday gets lassoed by the Whitby Dunlops on the this goal scoring attempt last Friday night in the JL Grightmire Arena.  Dundas fell 9-4 to the Dunlops

“We’re not exactly screeching into the playoffs this year … it’s more like a wobble. We’ve done this in the past, and we have found success. So let’s get at it and see what happens,” added Robertson.

“Whitby is always a tough team, however, we’ve seen them in the playoffs a few times recently, so we know what to expect. A series with them is always tough, and provides great hockey. This year will be no exception.”

Brantford finished in first place with 20 wins and four losses while the Dunlops came second with 15 wins and nine losses. Dundas was third with a 13-11 mark.

The best-of-seven semi-final between Dundas and the Dunlops opens in Whitby on Wednesday (Feb. 20) at 8 p.m., and returns to the Dundas Grightmire Arena two nights later at 7:45 p.m. Game three is set for Whitby on Saturday (Feb. 23) at 6:30 p.m. Game four will be at Dundas on Friday, March 1 at 7:45 p.m. The final three games, if necessary, have yet to be determined.

In other action, Orillia Sunrise Toyota Tundras and Welland Whalers met Tuesday night (Feb. 19) in the West Orillia Sports Complex in the second game of a two-game total-goal wild card playoff to determine fourth place in the standings and the final playoff spot. Both teams tied 1-1 at Welland in the opening game of the series on Monday (Feb. 18).

Under ACH rules if five or fewer points separated the fourth and fifth place teams in the final standings, a wild-card series would be held to determine the final playoff spot. The winner of that series would be awarded fourth place and proceed into the semi-finals while the loser of the series would be eliminated from post-season play.

The winner of the Tundras-Whalers series will advance against the Blast in a best-of-five semi-final. Game Photos | Real McCoys (4) vs Whitby Dunlops (9) | Friday, February 15th, 2013