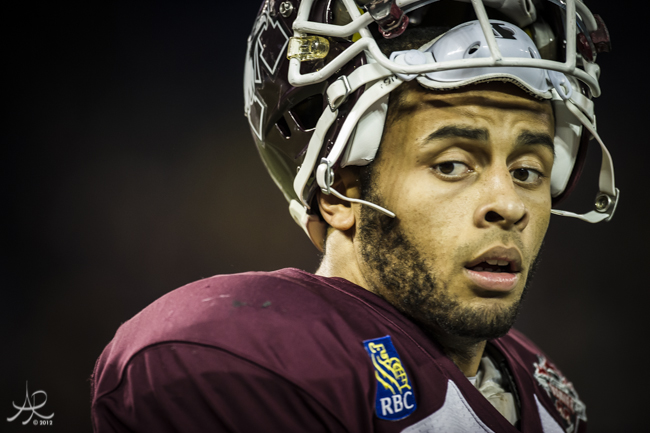 The 6’2, 240 defensive lineman from Hamilton has been invited to National Football League Super Regional Combine in Dallas, Texas on April 7. D’Aguilar received the invite based on testing results he had posted in an NFL Regional Combine in Florida.

“It’s champ to be invited to this Combine as it gives me a personal opportunity to prove that I have what it takes despite being Canadian and whatever misconceptions that may carry,” commented D’Aguilar.

With the goal of putting in a great performance at the Super Combine, the Hamilton defensive star will be working on improving on certain areas.

“The biggest thing I’d like to do to prepare for the Combine is to run hills once the weather clears up,” explained D’Aguilar.

D’Aguilar has just completed his fourth season with the Marauders of Ontario University Athletics. In October 2012, he set a Canadian Interuniversity Sport record for single season sacks as he amassed 12.5 sacks in eight games. He also registered 28 tackles, 11 tackles for a loss, a forced fumble, and a pass break-up.

Photo: Robin Leworthy Wilson (Aerial Promotions) He was the top pass rusher on the Marauders defense. For his exceptional play on the field, D’Aguilar was awarded the J.P. Metras Award as Lineman of the Year. In 2011, he led the Marauders to a Vanier Cup victory. This past September, he was ranked fifth on the Canadian Football League’s list of the Top 15 Prospects for its 2013 draft, which is set to take place on May 6. Moreover, D’Aguilar will participate in this upcoming weekend’s CFL Combine.

Previous to the Marauders, D’Aguilar spent a season at Fork Union Military Academy. Other teams that he has suited up for include the Hamilton Ironmen and his high school team, the Barton Barons of the Southern Ontario Secondary Schools Association.

The NFL Super Regional Combine will be on the NFL Network and NFL.com