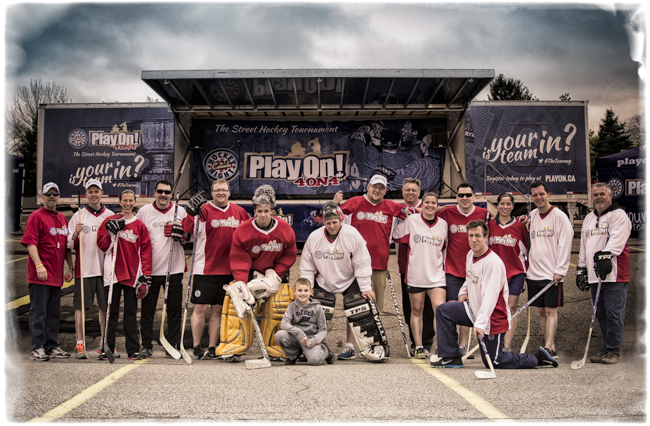 Hockey Night in Canada Play On 4 on 4 Street Hockey Tournament | May 11th-12th, 2013 | Mohawk College-Hamilton, Ontario: Becky Keller was steller! One of her three Olympic Gold Medals accompanied her, as she sincerely talked with the kids. Many other local personalities joined her in a fun and entertaining Celebrity Game.

So what do you do when covering over 20 rinks, hundreds of teams in the worlds largest hockey festival?.... Click Click Click!  Here are some of my favorite action highlights from Day 1 of the HNIC Play On tournament.

Photo Tip of the Day!  Sometimes you don't have a lot of time to get a photograph, especially with a large group. You don't want to inconvenience them to move to another location, not enough time and you may not notice things until after the photo is taken.

The backdrop of the vendor in the back says "Pig Out"-BTW Great Food!!! -BUT- Although it makes for a funny shot, I'm thinking I can do better. I took a background shot of the host stage and composited the photo of the celebrities.

The photo was extracted using a Wacom Cintiq Tablet and post processed in photoshop and lightroom using a variety of filters from Nik, OnOne software.

Official Photographer for 2013 HNIC Play On Hamilton! Images may be purchased at www.Present It Photo.com