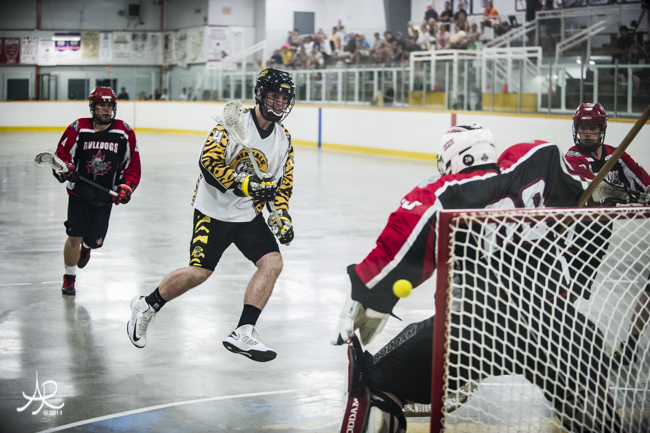 A battle for second place could be on the line Saturday when the Hamilton Bengals visit the Halton Hills Bulldogs in Ontario Junior C lacrosse play.

Going into Wednesday night’s (June 5) contest at home against Huntsville, the Bulldogs trailed the second place Bengals by one point in the Ontario Junior C Lacrosse League’s West Division standings. The Bengals and Bulldogs battled to a 5-5 stalemate in their last encounter on May 30 at the Bengals lair, Lawfield Arena. The Bengals followed that game with a 5-2 home victory against Huntsville on Sunday (June 2). The Bengals remain unbeaten in six games with four wins and two ties.

Thursday’s game against the Bengals was a rematch of last year’s divisional final. The Bengals jumped to a quick 3-0 lead before the midway point of the first period, thanks to goals by Shane Ruddy, Paul Daniel, and Danny Williams. However, the Bulldogs scored twice to cut the lead to one before the end of the first.

The Bengals and Bulldogs battle to a 5-5 stalemate on May 30, with overtime solving nothing at Lawfield Arena. (Photo: Robin Leworthy Wilson, Aerial Promotions)

For the balance of the game, penalties on both sides meant considerable time was spent visiting the sin bin before the final buzzer.

Meanwhile, Hamilton added two more power play goals by Cree Blakely, but Halton still managed to outscore the Bengals in the final period to force overtime, which failed to resolve the deadlock.

Jason Gibson was fantastic between the pipes as he turned away 38 of Halton’s 43 shots. This was the fewest number of goals Halton has scored this year. Gibson was also the benefactor of a Bengals defense which shut down the high powered offense of Halton Hills. The latest standings show the Bulldogs with a league-leading 51 goals in five games.

Both Hamilton and Halton Hills made many trips to the penalty box before the final sound of the buzzer. (Photo: Robin Leworthy Wilson, Aerial Promotions))

Hamilton’s Zach Almas was a big presence for such a small body, throwing some of the game’s biggest hits. Defender Cole Martin did an excellent job of shutting down one of the league’s top scorer – Adam Charalambides – who was held to just two points on the night.

Sunday’s rematch against the Bulldogs in Acton begins at 5 p.m.

The Huntsville Hawks made their first ever trip to Lawfield Arena on Sunday, but because of provincial high school lacrosse championships the next morning, the Hawks had a depleted bench and penalties compounded the short bench.

After going up 3-0 thanks to a pair of goals from Mac Huckla and a single from Tommy Almas, the Bengals offense slowed down due to some key injuries. Coach Clancy Almas, had to juggle some lines around moving some defenders up to fill the holes of the ailing offense.

Anthony Baboth was once again stellar between the pipes as he only gave up two goals on 33 shots. He now sits third on the OJCLL goals-against-average chart with a 3.47 mark.

Hamilton’s next home game will be June 13, 8 p.m. at Lawfield Arena against the fourth place Fergus Thistles.