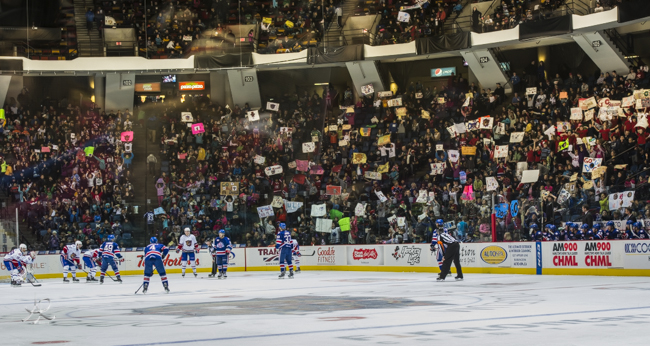 For a fifth straight game, the Hamilton Bulldogs had little to show for their efforts and sent home more than 12,000 disappointed fans after dropping a 3-1 American Hockey League decision to the visiting Rochester Americans on Wednesday (Nov. 13).

But the one positive outcome of the School Day Game (the opening faceoff was at 10 a.m.) at Copps Coliseum was Bulldogs’ rookie forward Sven Andrighetto scoring in a fourth consecutive game.

The loss left Hamilton with a 5-6-0-3 record while their North Division rivals improved their first place standing with a 6-3-2-2 record. Despite the five straight setbacks Hamilton sits third in the division, just three points back of the Amerks. Hamilton has scored one goal in each of its last three games.

Rochester got a pair of goals from Luke Adam – his 10th and 11th of the season – and a single marker from Phil Varone.

Andrighetto notched his team-leading seventh goal of the season to tie the game 1-1 after one period of play.

After a scoreless second period, Adam scored just 23 seconds into the third period. His second goal was into a net vacated by goaltender Dustin Tokarski for an extra attacker.

Tokarski made 33 saves on 35 shots for the Bulldogs and his counterpart, Matt Hackett, stopped 26 shots.

The Bulldogs went 0-for-4 on the power play, while the Americans went 1-for-6.

Hamilton’s next game is scheduled for Friday (Nov. 15), when the Lake Erie Monsters (AHL affiliate of the Colorado Avalanche) visit Copps for a 7:30 p.m. game.

And for that game, the Bulldogs should have forward Gabriel Dumont and defenceman Greg Pateryn in their lineup. The two were returned to Hamilton from the Montreal Canadiens after a callup to the National Hockey League team.

Dumont has been held pointless in two games with Montreal this season. In 12 games with Hamilton this season he has four assists.

Pateryn has not dressed with Montreal this season. He has played in seven games with Hamilton this season, recording seven points (three goals, four assists) and eight penalty minutes.

A HUGE THANK YOU to the Hamilton Bulldogs Organization and Photographer Brandon Taylor for the invitation to photographs such an energizing event!  What a real life experience field trip to go to an AHL game with 12K+ of your peers...On a school day....YAY! I tried to get around as much as possible to photograph all the amazing Bulldog posters and the fans. I only wish I could have photographed them all. My personal growth lesson for day was to challenge myself by shooting strobe the entire game on ice level. That meant no 4oo from the birds nest or rapid fire. Sometimes changing the camera settings from crowd shots to action was a challenge. Brandon is tremendously encouraging and really fun to shoot with. I focused more than usual on ambiance of the event and specifically the crowd.  I was in AWE!!!! Copps Coliseum SHOOOOOOOOK with the kids making noise...I think the girls won LOL! I hope you feel the energy when you watch the highlights of the game from my perspective.  Get out to a Hamilton Bulldog game...It would be nice to see that energy again and everyone cheering for great hockey!!! Go Dawgs! Ok so it wasn't a victory, but the kids celebrated like it was! Hamilton Bulldogs (1) vs Rochester Americans (3) at Copps Coliseum, Hamilton on November 13, 2013