When Aerial Wilson received the email from Ganon Baker Basketball saying “Congratulations you have you have been selected to come to our “Live” NCAA College Coach – National Girls Event…”, she jumped at the opportunity. 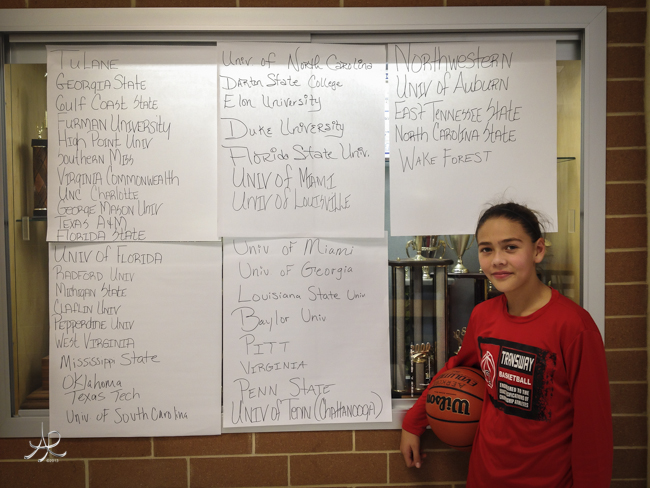 By the end of the third day camp another piece of bristol board was added with the addition of many more Universities.[/caption]

Unaware of the tremendous talent in the Deep South and the only Canadian invited, Aerial’s goal was to learn from the experience. The weekend presented itself with an abundance of skill training, testing, game experience and a ton of basketball knowledge. Some of the top ranked basketballers from grade 7-12 in the country attended. The athletes, families and coaches were very supportive and encouraged all involved. The number 1-2 ranked player in the USA, A'ja Wilson is an exceptional athlete to watch and phenomenal young lady. Knowing Aerial was the youngest at camp she took some time to speak with her. To have a mentor speak about the hard work and sacrifice she makes everyday really grabs Aerial's attention. 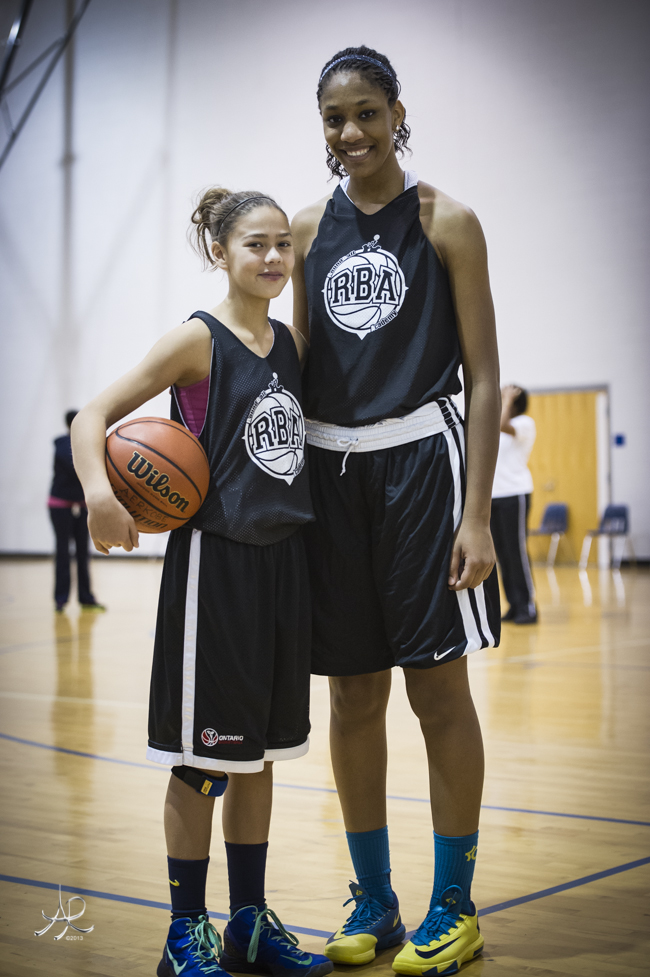 Aerial is in love with basketball. At 11yrs old she wants an academic/athletic scholarship and to play in the WNBA. “I’m gonna dunk”, she states with conviction.

David Omerod of Saltfleet High School organizes the Ganon Baker basketball camp every year (2012 Video, 2013 Post). MJ was six months pregnant running the camp with Ganon in August. An amazing role model to watch, as she did push-ups, drills and inspired the young athletes. It was MJ who saw Aerial’s potential and believed Aerial is talented enough to attend the Girls National Skills Select Showcase. 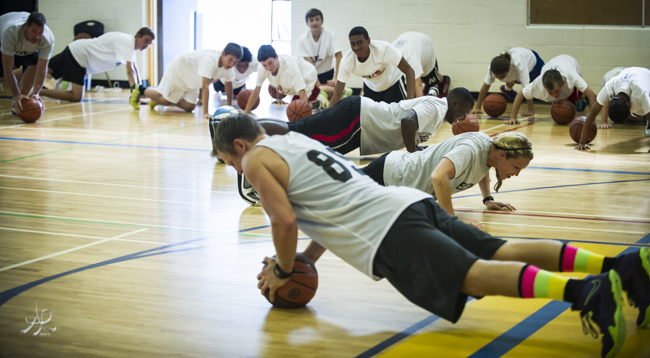 Aerial Wilson: “Ganon Baker’s camp is the best. It gives me a new, tougher basketball mentality. It makes me a bigger threat on the court with more knowledge and moves. When I was approached by Ganon himself, I was thrilled and overjoyed to be invited to an NCAA camp. Originally I had to wait a couple of more years, but my countless hours of practice and hard work paid off.  Everyday I think of my dreams and passion for basketball.  I am now one step closer to my goal.”

Unfortunately MJ and Ganon Baker could not attend expecting at almost 9 months. Everyone at the camp wish the couple all the best. Kelly Kline, Editor of Full Court “Your Ticket Inside Women’s Basketball” and her team ran an exceptional event. 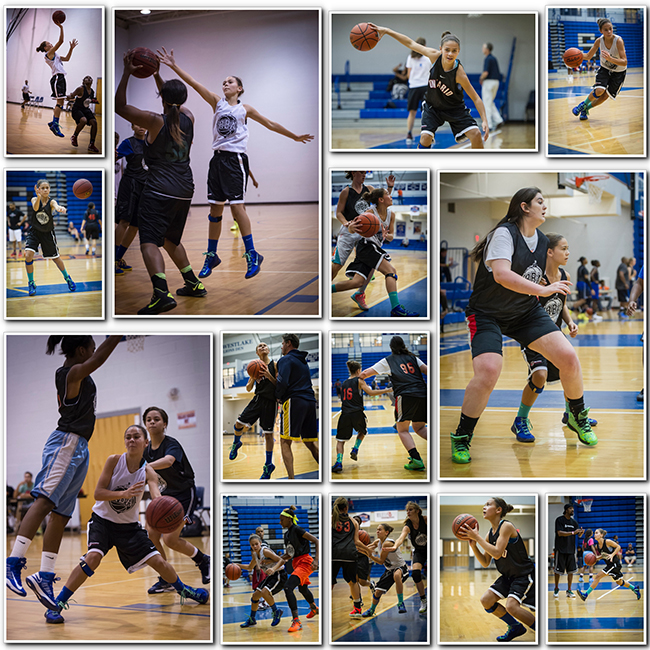 Aerial Wilson: “On the first day of camp, I couldn’t stop thinking about how big the girls were. I wasn’t going to let height hinder my performance. I played aggressive, strong and confident with the ball. I gave my best on both ends of the court, always trying to be a part of the play. I had some moments and a lot of room to grow. Playing along side and against some the top ranked players in the nation is an honor. I met so many great people and learned a lot from this camp. Playing against these girls has made me jump higher, run faster, pound harder, stronger and tougher. This experience has shown me what I need to do to accomplish my goals and live my dream. Thank you!!!!!”

Team Ignition ran a series of tests to analyze athleticism of the girls. Aerial had a 22" vertical and ranked 9th overall in lateral agility out of 130 athletes tested. More results to come. 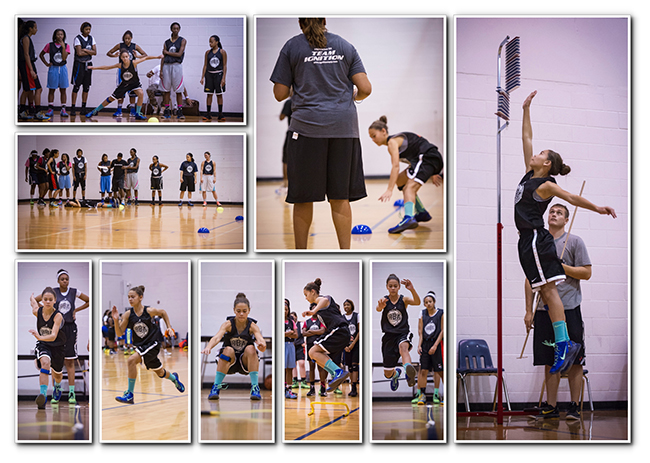 The girls of The Full Court Fresh 50 Invitational had the honor of meeting Basketball Legend Chamique Holdsclaw. Prior the game Holdsclaw has a heart to heart with the girls about her basketball career path to the WNBA. 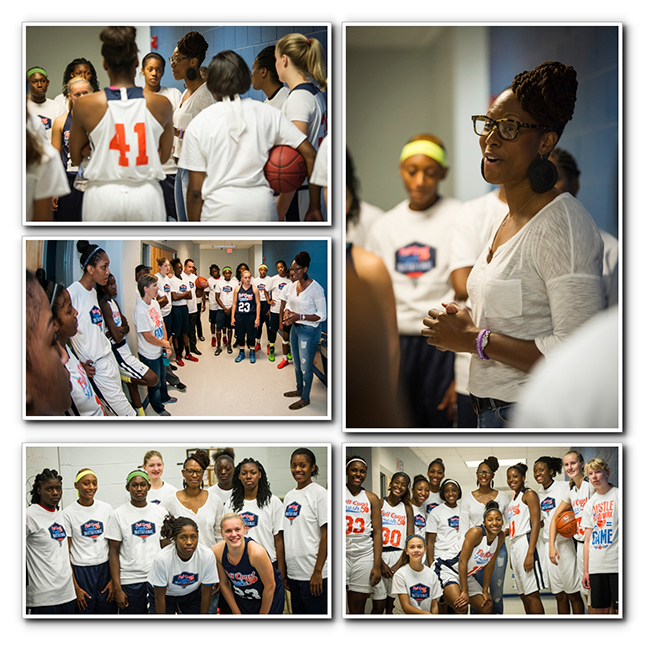 The Full Court Fresh 50 Invitational National Game featured girls basketball players ranking in the top 100 and was followed by a Regional Game. http://www.fullcourt.com/prep/24104/stars-shine-expected-full-court-fresh-50-invitational Both Games were streamed live on FullCourt.com and the iHigh Network. Commentators for the games will be ESPN women's basketball analyst Nell Fortner and Full Court/Max Preps staff writer Clay Kallam. 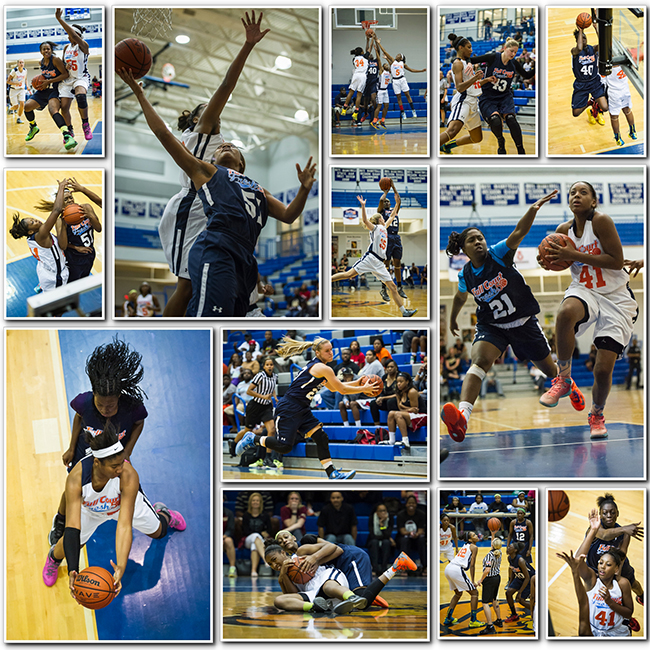 At the end of the Full Court Fresh 50 Invitational National Game Chamique Holdsclaw embraces the opportunity to present the MVP award to fellow New Yorker Sierra Calhoun. Erykah Davenport announces to the crowd that she will be attending Miami in the Fall. Thank YOU to Kelly Kline for allowing me to be a part of your inaugural event. (You can throw me into the fire any day! LOL!)[More Photo's Here] 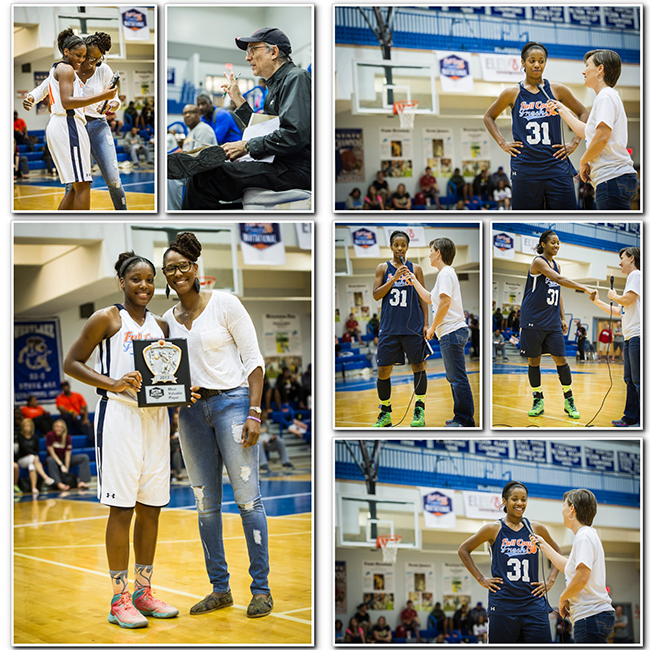 Slam Dunks to Dunkaroos! I am a huge fan of Dr. J (Julius Winfield Erving II) and I want to be entertained! Dunking a basketball is exciting and basketball players are getting more and more creative. Many people are not blessed with the ability to jump over 6' & only dream of dunking like a pro. Visualization is half the battle, so as a photographer I can make real time images. With the aid of technology & specific equipment, I am able to shoot different angles, be creative with my athletes developing their mental image to peak performance realty!  [More] 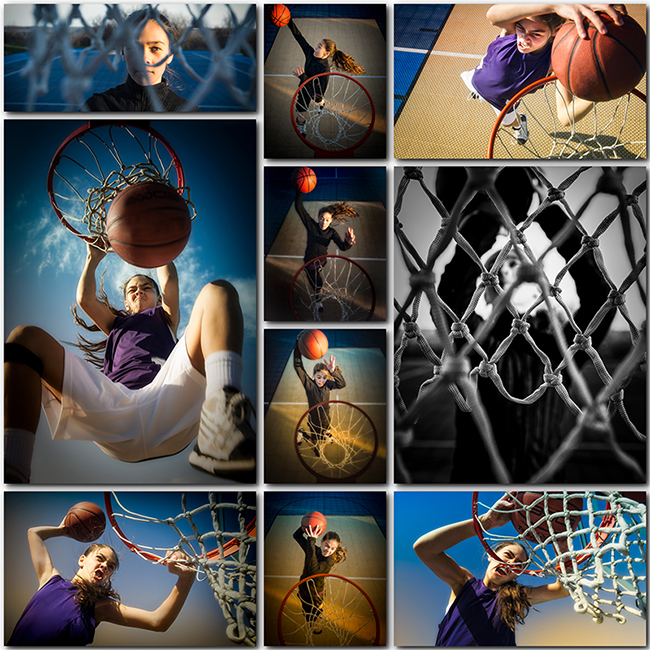